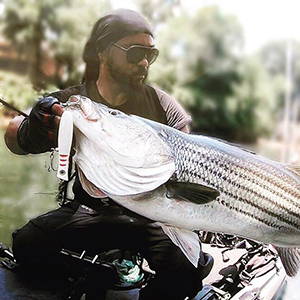 Being on the water is all River Wolf has ever known, he considers it a second home. Mentored by his father, he took the young Wolf on all his adventures. One minute they’re chasing salmon & steelhead and the next running 60 miles out in the family boat to chase albacore & bluefin tuna & everything in between. Extreme fishing was a way of life & twice they had to be rescued by the Coast Guard. When it was his time to go to college River Wolf stayed true to his passion and got a degree in Environmental Science with an emphasis in Fisheries Management. With this he would work for The Monterey Bay Salmon & Trout Project farming and raising endangered strains of coho salmon & steelhead to their specific rivers where populations were suffering. He would later move on to work for U.S. Abalone, a private fish farm that met the demand for abalone for the U.S. & Japanese markets. He would later give this all up to pursue his other passion as a musician & music producer. One of the highlights was when he received honorable mention for song of the year through Billboard. Yet the thought of abandoning fishing and the water altogether is out of he question. River Wolf considers himself lucky to be able to do both of his passions music & fishing. He currently represents Tactical Anglers, YakAttack, Capehenry Vega USA, Westbrook Fishing Team & is a National Pro for NuCanoe.